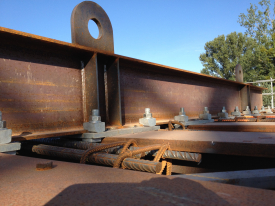 The steel deck of a railway bridge structure in the Doubs Region of East France needed replacing.  The initial thoughts were that Pad Eye lifting beams would be welded to the steel deck beams for lifting them into place and then they would be removed afterwards until the option of using our BeamClamp system was suggested.  The BeamClamp system provided flexibility in the final positioning of the lifting beams but the main attraction to the client was that our system could be removed without any damage to the steel deck.  The train line that the bridge connects is the Arc-et-Senan / Franois and the bridge itself is 112 metres long.  The application required 36 four bolt connections that used our M24 BA and BB Clamps in combination to connect and IPE 300 to the top of a HEA 900 at 90 degrees to each other.  The load requirement per set was 7.3T which with the M24 was achieved easily with a 5 to 1 factor of safety built in.  The general contractor said that initially they were unsure about not welding as they had not used this system before but after seeing the benefits and that the client was extremely happy with the condition of the steel deck after lifting that they would definitely use our system again for future applications.

Have a Question? Call A Representative

Speak directly to one of our team at Kee Safety at: